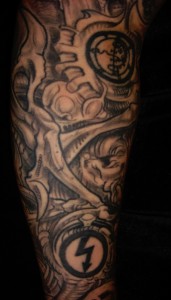 Adal believes that the esoteric mystique – part of the real power of tattoo – has been lost in the translation into mass appeal. Furthermore, the exploration of different styles of art into the common tattoo vocabulary has been compromised by the ‘instant gratification’ mentality of people just wanting that tattooed look. At Majestic, Adal hopes to create inspirational tattoo artwork that starts to reshape the way that tattoos are perceived.

The first Majestic Tattoo NYC studio opened in December 2011, situated among several modern art galleries in the burgeoning art district of Tribeca. Majestic Tattoo NYC focuses on offering visionary, custom tattoos to serve as a departure from the more traditional, commonplace tattoo artwork offered throughout New York City. Adal’s goal for the studio is to move tattooing away from the overly-commercial, glorified institution that the media has helped it to become. Adal, who has been named one of the best tattoo artists in NYC for modern, colorful tattoo art, aims to use Majestic Tattoo as the venue through which he can achieve his larger goals for affecting the world of tattoo and other art forms as well.

Since October 2014, Majestic has been operating out of our newfound location in Brooklyn, further in the heart of New York City, on the very block the NYCDOT recently sighted as the actual center of New York City. We look forward to being a part of redevelopment of this area of North Brooklyn.